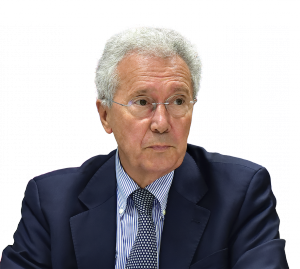 Pierre Véron is a French patent litigation specialist, member of the Paris Bar.

Born in 1947, admitted to the Bar in 1969, Pierre Véron founded, in 1971, the commercial law firm Lamy, Véron, Ribeyre & Associés in Lyon. In 1996, he joined the Paris Bar. From 2001 to 2017, he practiced as a partner of the law firm Véron & Associés, with offices in Paris and Lyon, dealing exclusively with patent litigation.

Representing large French and international companies and organizations, Pierre Véron was the first to argue before a French court a case involving a European patent (1990), a nanotechnology patent (2003) and an infringement case of a molecular biology patent (2007)1. He has obtained for his clients some of the highest damages ever awarded by French courts for patent infringement. In 2019, he had the court of appeal set aside the largest ever patent infringement damages award reported in Europe ( €25,000,000)2. The US guide Best Lawyers  named him  Lawyer of the Year, for intellectual property in France in 20103 and in 20194. In 2006, he was featured in the list of the most respected patent lawyers of the world published by Who’s Who Legal5.

Former president of the EPLAW (European Patent Lawyers Association), which he founded in 2001, and of the AAPI (French association of patent litigators), Pierre Véron also taught European patent litigation at the CEIPI (International Centre of Industrial Property Studies) in Strasbourg for many years.

Between 2007 and 2012 Pierre Véron served as an expert with the European Commission for the creation of the Unified Patent Court in Europe. Since 2014, he has been a member of the Drafting Committee of the Rules of Procedure of this court. He also serves as an expert on the panel advising this court’s Preparatory Committee6.

Former president of an arbitration centre and former associate of the Chartered Institute of Arbitrators, Pierre Véron has been involved in dozens of arbitration proceedings, either as counsel, arbitrator or chairman of the arbitration panel  (including patent cases administered by international arbitration centers).

As a former member of the board of the AIPPI French Group, Pierre Véron has presented several reports on behalf of this Group at the AIPPI Congress: Obtaining of evidence of the infringement of industrial property rights (1986 London), Experimental use as a defence to a claim of patent infringement (1992 Tokyo). He has also acted as an officer of various international AIPPI committees: Methods and principles of novelty evaluation in patent law (1995 Montreal), Confidentiality, disclosure and publication of data in information networks (1997 Vienna), Enforcement of intellectual property rights (1998 Rio de Janeiro), The Hague Convention on jurisdiction in civil matters (2001 Melbourne) and Jurisdiction and Applicable Law in the Case of Cross Border Infringement of Intellectual Property Rights (2003 Lucerne).

He is the author of several dozens of articles in English and French on national and international patent litigation.
See the page Publications

Pierre Véron is a frequent speaker at international conferences  on patent litigation practice.